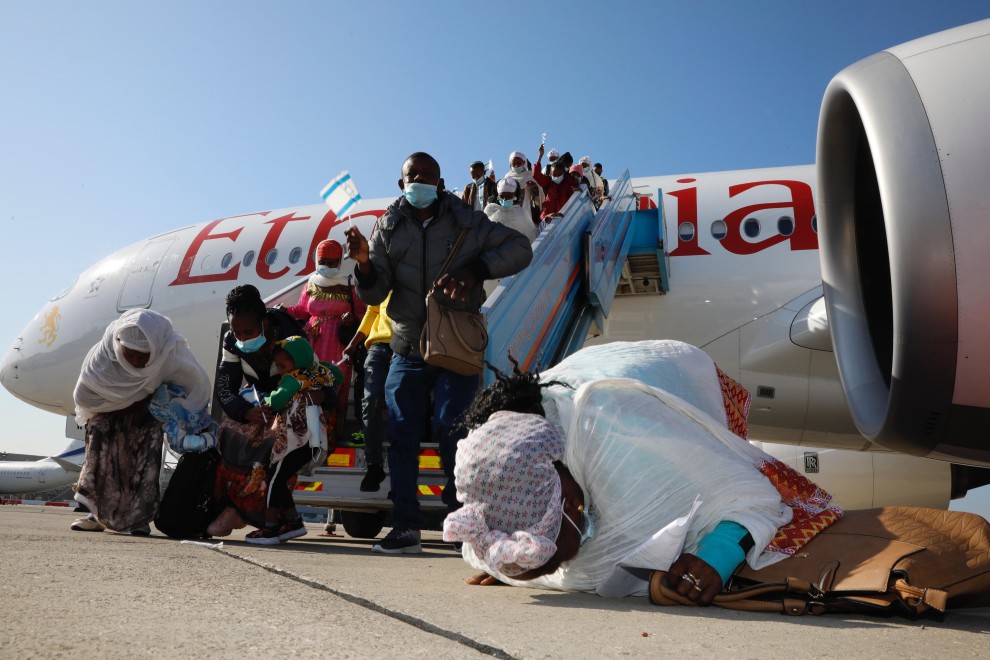 Tel Aviv, December 3, 2020 — 316 olim (immigrants) arrived in Israel this morning from Ethiopia, with another 100 landing tomorrow, as part one of “Operation Zur Israel.” Watch this moving video (01:48) of their landing and welcome in Israel, and learn more about the history of Ethiopian Aliyah here.

Operation Zur Israel follows the Government of Israel’s decision in October of this year to approve the Aliyah (immigration) of 2,000 members of the Ethiopian community, many of whom have been waiting for decades to move to Israel and reunite with their families.

Minister of Aliyah and Integration Pnina Tamano-Shata and Chairman of the Executive of The Jewish Agency for Israel Isaac Herzog, along with the Ministry of Interior, are overseeing the operation.

“I was on a week-long mission in an attempt to bridge the decades-long gap for thousands of Ethiopian Jews who were left behind after Operation Solomon and the government decisions that followed. They are waiting to not only fulfill their dream of Israel and Jerusalem but to meet their basic request of reuniting with their families here in Israel. It was extremely difficult and unsettling for me to see so many of the waiting community living with malnutrition, poverty and in extreme conditions. Their lives are literally on hold! It’s not easy to receive phone calls from elderly mothers pleading to bring their children home who have been left behind in Ethiopia, who they have not seen for many years and who have so far been refused Aliyah. Sometimes there are one or two children left behind, with the rest of the family here in Israel,” Minister of Aliyah and Integration Pnina Tamano-Shata said.

“I'm optimistic! I believe in us as a society and believe that we will do everything possible to quickly resolve this painful and personal issue that has been going on for too many years,” the Minister continued. “I consider Operation Zur Israel one of the greatest deeds and one of the best decisions made by the unity government. A moment that transcends the controversies and debates, a moment of saving lives and most importantly, a moment of national duty that reminds us who we are as a people and that we are privileged to return home after thousands of years of exile. Am Yisrael Chai!"

“It’s incredibly moving to watch the landing of this flight full of new olim from Ethiopia, the first part of Operation Zur Israel. We will continue this airlift of 2,000 olim who will reunite with their families in Israel after many years of separation. For years, families both in Ethiopia and Israel have been pleading and praying to rejoin their loved ones,” said Chairman of The Jewish Agency Isaac Herzog. “It was wonderful to see Minister of Aliyah and Integration Pnina Tamano Shata land with the olim on this first flight, an emotional chapter in her own personal story. The Jewish Agency, together with the Ministry of Aliyah and Integration and the Ministry of Interior, have been working for weeks – both in Israel and on the ground in Ethiopia – to make this moment possible following the Government of Israel’s decision this past October, and we are now seeing it unfold before our eyes.”

“I do not remember being so moved, for many years, by such a purely Zionist sight that expresses all that we stand for. My wife Sara and I stood with tears in our eyes at the reception, watching the olim, our Ethiopian Jewish brothers and sisters getting off the plane….touching the ground, the Land of Israel. A mother kissed the ground as she exited the plane, carrying a baby named Jerusalem and another baby named Esther. Esther and Jerusalem have now come to Israel - and this is the essence of the Jewish story, this is the essence of the Zionist story,” Prime Minister Benjamin Netanyhau said. “We are so moved to welcome you here. Welcome to the State of Israel. I have seen pictures of you holding photos of your relatives here in Israel that you long to see, and they long to see you. Now comes this wonderful family reunion. You have been waiting a long time for the dream to come true, and today it is coming true.”

"In my discussions with the National Security Council, along with the Sudanese government with whom we are in contact with for normalization and peace, I have sought to allow families to visit the sites in Sudan where their loved ones perished on the journey to Israel. This process is progressing,” Prime Minister Netanyahu added.

“We are continuing the Zionist vision in its purest sense – ingathering of the exiles. You, who are standing at the gates of this country, carry a wonderful tradition spanning thousands of years, and it is the obligation of the State of Israel to ensure your integration into Israeli society and give you every opportunity to start your new lives here. Despite the pandemic, it’s incredibly important that you arrived now and that we learn the lessons from past Aliyah integrations,” said Israel’s Minister of Defense Benny Gantz to the new olim. “I’ve been closely following developments in northern Ethiopia and their impact on the community waiting to make Aliyah. We are looking into ways to expedite their Aliyah, and, if needed, evacuate them to a safer area.”

This morning’s landing at Ben Gurion Airport is the first stage of bringing the remainder of those waiting in Ethiopia to Israel. The Ministry of Aliyah and Integration and The Jewish Agency will continue to support the community in Ethiopia, including medical care and a daily nutrition program for children, pregnant women and nursing mothers.

Following the required quarantine of all new arrivals, the olim will reunite with their families in Israel. The Ministry of Aliyah and Integration and The Jewish Agency will help settle the olim in absorption centers throughout the country, where they will receive support and guidance in all areas of life, from learning Hebrew to entering the workforce and the Israeli education system.

Read the latest aliyah report from the Jewish Agency.

The Jewish Agency is able to carry out the important work of bringing Ethiopian olim to Israel and reuniting them with their families with the support of its partners, the Jewish Federations of North America (JFNA) and Keren Hayesod, and with generous support from The Christian Embassy, the Crown Family Foundation, The International Fellowship of Christians and Jews, Jewish donors and foundations, and friends of Israel from around the world.