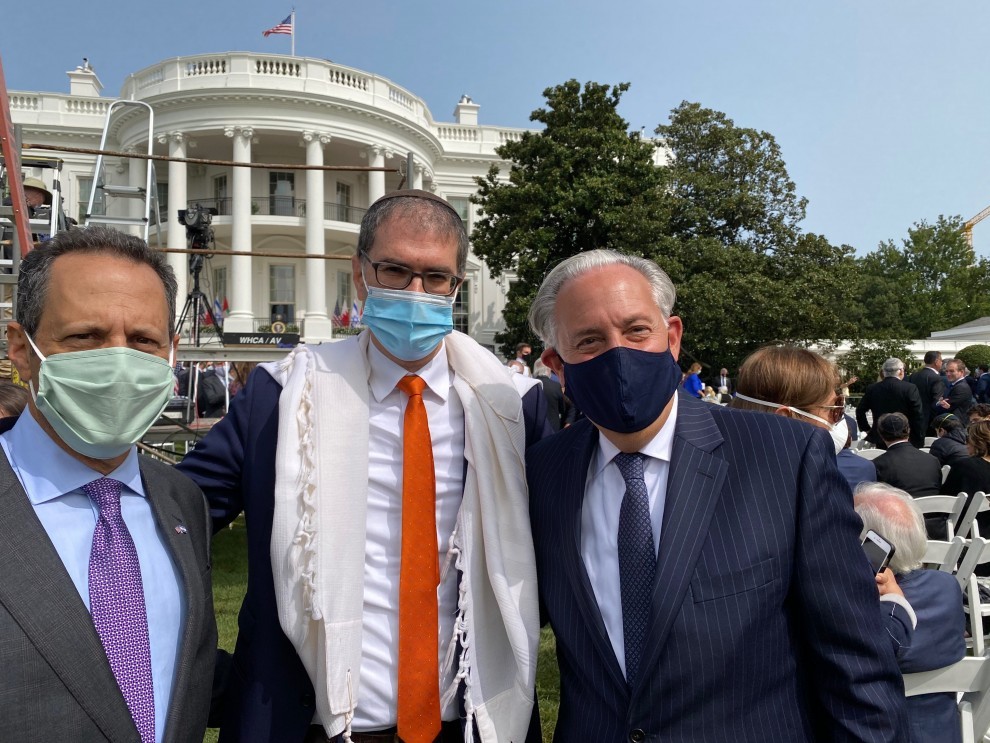 This week, JFNA organized a special session in Israel’s parliament together with the Knesset’s Aliyah, Integration and Diaspora Affairs Committee, on the emerging Jewish community in the United Arab Emirates. In addition to Chief Rabbi of the UAE Yehuda Sarna and JFNA President & CEO Eric Fingerhut, other featured speakers included Israel’s Minister of Diaspora Affairs Omer Yankelevich, Committee Chair David Bitan, Jewish Agency for Israel Chairman of the Executive Isaac Herzog, Jewish residents from the UAE who joined by Zoom to speak of their experiences, and many others.

It is with this mission in mind that it is especially an honor to appear before the Knesset Aliyah Committee to discuss the historic development of the Abraham Accords and the process of normalization between the State of Israel and UAE. The organized Jewish communities of North America have been watching this development with the greatest sense of excitement, pride, and hope for the future, and we are eager to do everything we can to support and advance this great cause of peace.

I was personally proud to attend the signing of the Abraham Accords at the White House this past September, and that evening to travel to Dubai with a small delegation to thank the leadership of the UAE and to celebrate Rosh Hashanah with the Jewish Council of the Emirates, led by my dear friend Rabbi Yehuda Sarna and Mr. Ross Kriel. Praying with Jews from all over the world in the open and surrounded by the friendship and support of the Emirati population was an experience I will never forget. I also had the privilege of attending the completion of a Torah scroll written by Rabbi Duchman and to celebrate with many in his community as well.

The first and most important point I wish to make is that the Jewish Federations of North America stand ready to assist in building the Jewish community of the Emirates in any way we can. We will bring our century of expertise and our global partnerships to bear in doing just that.

The second point I wish to convey to this committee, and to all those who are committed to building support for Israel around the world, is the potential of this development to remind our own Jewish community in North America about Israel’s desire for peace, it’s unbending quest for peace, and its willingness to go to great lengths to embrace peace with its neighbors and the entire Middle East. I was a member of the United States Congress when the peace treaty was signed between Israel and Jordan, and was in the hall of Congress when Prime Minister Yitzhak Rabin of blessed memory and the late King Hussein addressed a Joint Session of Congress and embraced each other. I remember the feeling of euphoria at that time. But too many young people have experienced only the challenges to peace of the last decade, and the rise of terrorism in the Middle East. They are more likely to see the world through the prism of 9/11 than any other. Today we have chance to give our young people the hope for the future that they and the children of God deserve, the hope to live in peace, and to see peace for Israel and the nations of the world that are willing to step out of the shadows of fear and into this bright future. I urge the government of Israel to assist us in telling this hopeful story.

And finally, I want to emphasize that the Abraham Accord, by its very name, holds out hope for more than just normalization of relations between Israel and the UAE, but also shows the path to friendship between Jews and Muslims the world over. By choosing the name Abraham Accords, the framers of this agreement made a profound statement that must not be overlooked or undervalued – they made a statement about the hope that all the children of Avraham Avinu may yet live in peace and harmony, each under their own vine and fig tree. When Abraham dies, the Torah tells us, Vayikbru oto yitzchak v’yishmael banav – Abraham was buried by his sons – plural – Isaac and Ishmael.  Today Abraham’s sons have joined together in his name to build a brighter future for his descendants and the world.  May God bless this venture, and may we all do everything in our power to support its success