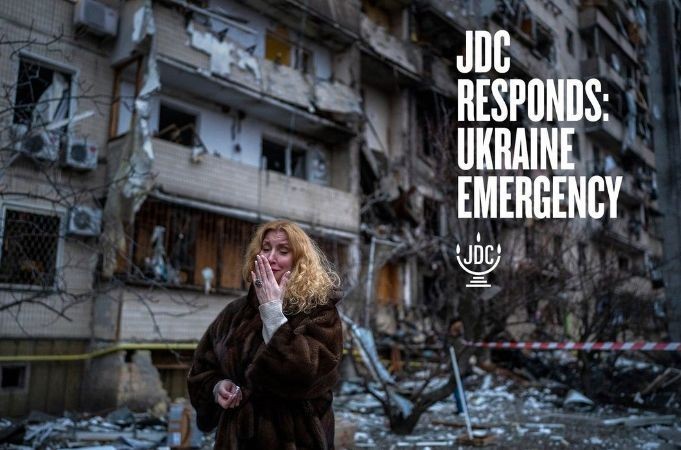 Last week Israelis and Jews worldwide celebrated the country’s incredible accomplishments over the past seven plus decades. The official opening ceremony of Yom Ha’atzmaut (Israel Independence Day) honored 12 individuals who made an outstanding contribution to the state. In a newer tradition, one of the 12 torches was lit by a member of Diaspora Jewry. JDC's Hesed Director in Sumy, Ukraine, Elizaveta Sherstuk, was this year’s chosen representative for her work overseeing the rescue of 250 Ukrainian Jews from the Russian border.

Some 38,000 olim (new immigrants) marked their first Yom Ha’atzmaut as Israeli citizens according to figures released by The Jewish Agency for Israel. This reflects the highest rate of aliyah in two-decades with about half of them making the move due to the war in Ukraine.

For those who remain in Ukraine, Birthright Israel – Taglit embarked on a special partnership with Hillel CASE to assist families in need.

Federations have now allocated a combined $48 million, including $25 million collective dollars, to the Ukraine relief effort. The most recent $1.2 million allocation went toward Hadassah Medical Organization for medical delegations and trauma units, the Israel Trauma Coalition for trauma relief, and Nefesh B'Nefesh for immigrant absorption.

The Impact of Federation’s Investment in JDC

Federation support for JDC through the annual campaign powers a range of vital services and programming that save and improve lives and build flourishing Jewish communities. This same programmatic reach serves as the scaffolding that enables our partners to respond nimbly and effectively during a crisis. See the impact of your collective dollars in Israel and around the world in JDC's 2021 Impact of Federation's Core Support Report. And watch this message of gratitude from JDC to Federations.

Dive into some of the programming mentioned in in JDC’s 2021 Impact of Federations’ Core Support Report by watching the videos below:

JDC has been working around the clock throughout Ukraine and in neighboring countries, caring for displaced people, providing humanitarian aid, ensuring passage to safety, and much more. The ability to provide an immediate and effective response during emergencies is due to JDC’s strong presence and infrastructure on the ground before crisis strikes. Read more about JDC’s Ukraine Crisis Response, and meet Larisa, a refugee currently in Moldova.

The Latest on Religion and State in Israel

Federation’s iRep initiative is proud to share the latest version of our Pluralism Update, a quarterly publication featuring new and encouraging developments in the fields of kashrut, conversion, marriage, and more.

Dive into Israeli attitudes toward crime and violence in Arab society; the difficulty of reaching a consensus among secular, religious, Arab and Haredi Israelis; what Israelis really think about their relationship with Diaspora Jewry, and more in JPPI's 2022 Pluralism Index.